During my recovery period, Jason spoke to the vet surgeon. She let us know that Annabelle was going to have to go for a CT scan or preferably MRI to determine the root of her inability to walk. There were another couple of wrenches in the mix: the CT and MRI machines are in the Winston-Salem branch of this animal hospital, which is about 30 minutes west of Greensboro, and Annabelle needed to be transported there. Of course, we were in Raleigh, an hour and a half east of Winston-Salem, and unable to get to Greensboro for the next four to five hours. I do not quite remember the details of the conversation that Jason had with the vet, but due to an explanation of our circumstances, she ended up having someone from the Greensboro animal hospital transport Annabelle to Winston-Salem for us, so she could be evaluated and treated more quickly. The second wrench was that the MRI machine in Winston-Salem was currently being repaired, so they were going to start with the CT to see if they could get a baseline of whether Annabelle’s disk in her spine was ruptured or rule that out and hope the MRI machine was repaired, so they could use it instead of having to figure out how to get Annabelle to Raleigh or Charlotte to another MRI machine. While this process was started, we drove from the fertility clinic to the cancer hospital.

Upon arrival to the cancer hospital, we finally met Elizabeth the clinical trial nurse. Over the past week and a half, Elizabeth and I had been frantically working to figure out what additional and possibly repeat tests were necessary for compliance with the clinical trial standards, and also set the timing for after egg retrieval, because I could not be exposed to radiation or radioactive injections prior to retrieval, and get them done prior to starting chemotherapy on February 2nd. This had added a lot of stress to the process, since the timing of my retrieval would not be known until about 48 hours prior and because the appointments with radiology were only during business hours. Fortunately, Elizabeth had figured out my previous PET Scan and bone marrow biopsy were sufficient, despite being done at another institution. In order to use time efficiently, Elizabeth had overlapped all of my appointments on Friday afternoon, which were initially thought to include the CT, MUGA, and blood work. Prior to all three of us walking over to radiology, I mentioned I had an echocardiogram done on December 31st, and Elizabeth was able to pull the records and confirm they were sufficient and not too old, so she crossed the MUGA off of the list of necessary tests. As I sat in radiology drinking the fluid for the CT, Elizabeth reviewed all of the clinical trial paperwork, and I signed consents and releases. I had to wait one hour after drinking the fluid before the CT could be done, so we went up and had my blood drawn for the additional tests for the trial. The wait for the CT ended up being over 2 hours, and I wasn’t take back until after 4:30pm. I was in pain, exhausted from the egg retrieval, starving because I hadn’t eaten since 9pm Thursday night, and worried about Annabelle.

Just before I was taken back for my scan, we got the call from the vet, and were told the MRI machine was fixed, and they scanned Annabelle. They determined that it was not a knee issue, nor a ruptured disk. Instead, they discovered that she had an FCE, which is when a piece of cartilage breaks off and blocked her blood supply to her lower spine, causing a stroke to her lower spine and extremities. This can cause complete paralysis, but we were lucky because Annabelle had been showing signs overnight and throughout the day of trying to walk and move her back legs. They told us that they expected her to regain at least 80% functionality with therapy over the coming weeks and months.

Relieved with the thought of Annabelle not needing surgery and being able to recover and walk again, I went back for my CT thinking just a few more minutes and I would be done with tests, and we could be on our way to pick up Annabelle. Yet again, another wrench was thrown in the plan. The technician asked me to confirm that we were doing a CT of my chest and abdomen, which was partially correct. Since my lymphoma is limited to the nodes in my neck, my CT had to include my neck, but she only had orders for the chest and abdomen and couldn’t add the neck without the orders being updated. We both frantically tried contacting Dr. Park and Elizabeth, hoping they were still in the office at 4:40pm on a Friday, so they could update the order. Fortunately, Elizabeth was still in her office, so she was able to get the order updated, which had to be reviewed and approved by the radiologist, who fortunately had not snuck out of the office early. With about a 20 minute delay, instead of the hour or days as the technician had first estimated, she did my scan, and then we met briefly with Elizabeth again. She confirmed I had completed all requirements for the clinical trial and was set to start chemotherapy on Tuesday. She gave us a tour of the infusion area, which made me feel much more comfortable, knowing what to expect for my upcoming infusion days. After a big hug and smile from Elizabeth, we were finally able to start our trek over to Winston-Salem.

I was thoroughly relieved to sit in the car and eat hummus and carrots with only an hour and a half between us and Annabelle. Once we arrived at the vet, they explained the physical therapy we would have to do at home with Annabelle and showed us how to use the sling to help her walk. After many minutes of anticipation and watching the door to the back area, I finally saw the tech walk through the door with Annabelle. She was on so many medications that she did not really recognize us, which at that moment was completely heartbreaking. I am used to her squealing and sometimes peeing, because she is so excited to see me walk in the door. Instead, my poor baby had glassy eyes, was shaking with anxiety of not having control of her back legs, and could not keep her tongue in her mouth. We wrapped her up in a blanket and walked to the car with every fear that my little angel was in pain and may not ever recover to her former silly, bouncy, excited personality. We finally walked back in the house, where Annabelle resigned to our chair, wrapped up in blankets, both in pain and anxious. Jason and I spent the next several hours using a syringe to get Annabelle to drink water, and finally before we went to bed, she took her medication and had her tongue back in her mouth, and we spent the night waking up every hour or so due to her discomfort and mine.

I woke up Saturday morning to Annabelle making efforts to crawl across the bed, although she could not really use her back legs, and she had a bit of playfulness back. Shortly thereafter, I received a call from the embryologist. She informed me that of the 20 eggs that were retrieved on Friday, 19 were mature and fertilized! After 36+ hours of worry, frustration, uncertainty, pain, and recovery, we were relieved and overjoyed. The number of fertilized eggs far exceeded what our doctors and we thought we would have, and Annabelle was showing desire and determination to move and be herself. We still have a long way to go on both accounts. We’ve spent the rest of this weekend working with Annabelle on her therapy movements and seeing her make improvements toward walking and having probably 50% of her movement and control in her back legs, and we will continue to work with her at home and see the physical therapist and neurologist to help her regain hopefully 80%+ functionality. Between now and Wednesday, we will continue to receive updates from the embryologist on the development of our fertilized eggs to blastocytes by Wednesday, at which point they will be frozen. Dr. Fritz estimates that generally 60-80% of the fertilized eggs become viable blastocytes, so we’re hoping for the high end of that range.

The only thing I can grasp from this storm of the past three days, (and largely of the past almost six weeks) is to celebrate every glimmer of light, and let the rest of the storm fade into distant memories. Although I am in considerable pain, I have the hope of a future child, of being cured, and of Annabelle regaining full use of her back legs. Now it’s time to watch the Super Bowl, drink a mimosa, and snuggle a pup. 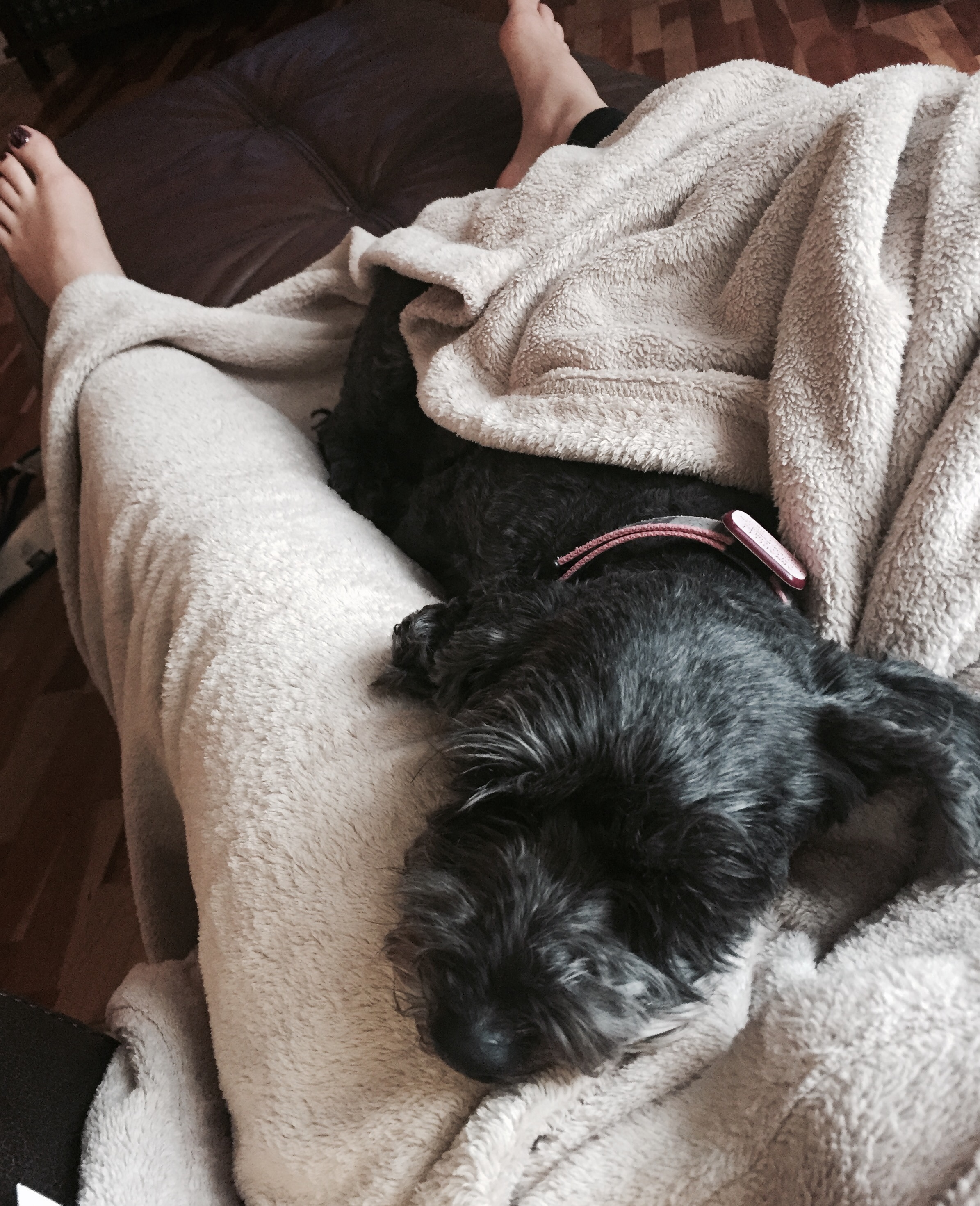 2 thoughts on “One Hell of a Storm”