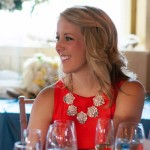 The day after my 28th birthday, December 23, 2014, I was diagnosed with diffuse large B-cell lymphoma, a form of Non-Hodgkin’s Lymphoma.  I participated in a clinical trial at UNC Lineberger Comprehensive Cancer Center (PET-Directed Therapy) wherein I received 3 rounds of chemotherapy (R-CHOP) starting on February 2, 2015 and then had a PET scan on April 2, 2015, to determine my responsiveness to chemotherapy. Dr. Park and the clinical trial team determined I had a complete response; therefore, I received one more round of chemotherapy on April 20, 2016, and finished my fourth round on May 10, 2015. I had follow up scans and labs on July 14, 2015, which confirmed that I showed no evidence of disease. I have been in remission ever since! I decided to keep a blog in order to update friends and family and raise awareness of rare cancers and provide insight for anyone who might be faced with this cancer.