Over the weekend, I was cleaning up the photos stored in my phone and came across the picture below. This was a picture I snapped on July 16, 2014, which captured the growing “balls” in my neck that were becoming increasingly visible (they are just to the left of my necklace and have red marks from me touching them). I have a vague memory of sending this picture to someone (mostly likely Jason and maybe Dan), but I largely ignored them. I brushed off any thought that they were a sign that something was wrong, because I was in great shape and health. Instead, I focused on many other things that seemed more pressing and important. I left one job and started another that I knew was a stepping stone in the right direction in my career. I spent most weekends through the summer and fall traveling and enjoying the moments in time when the major parts of my life felt in place and happy. 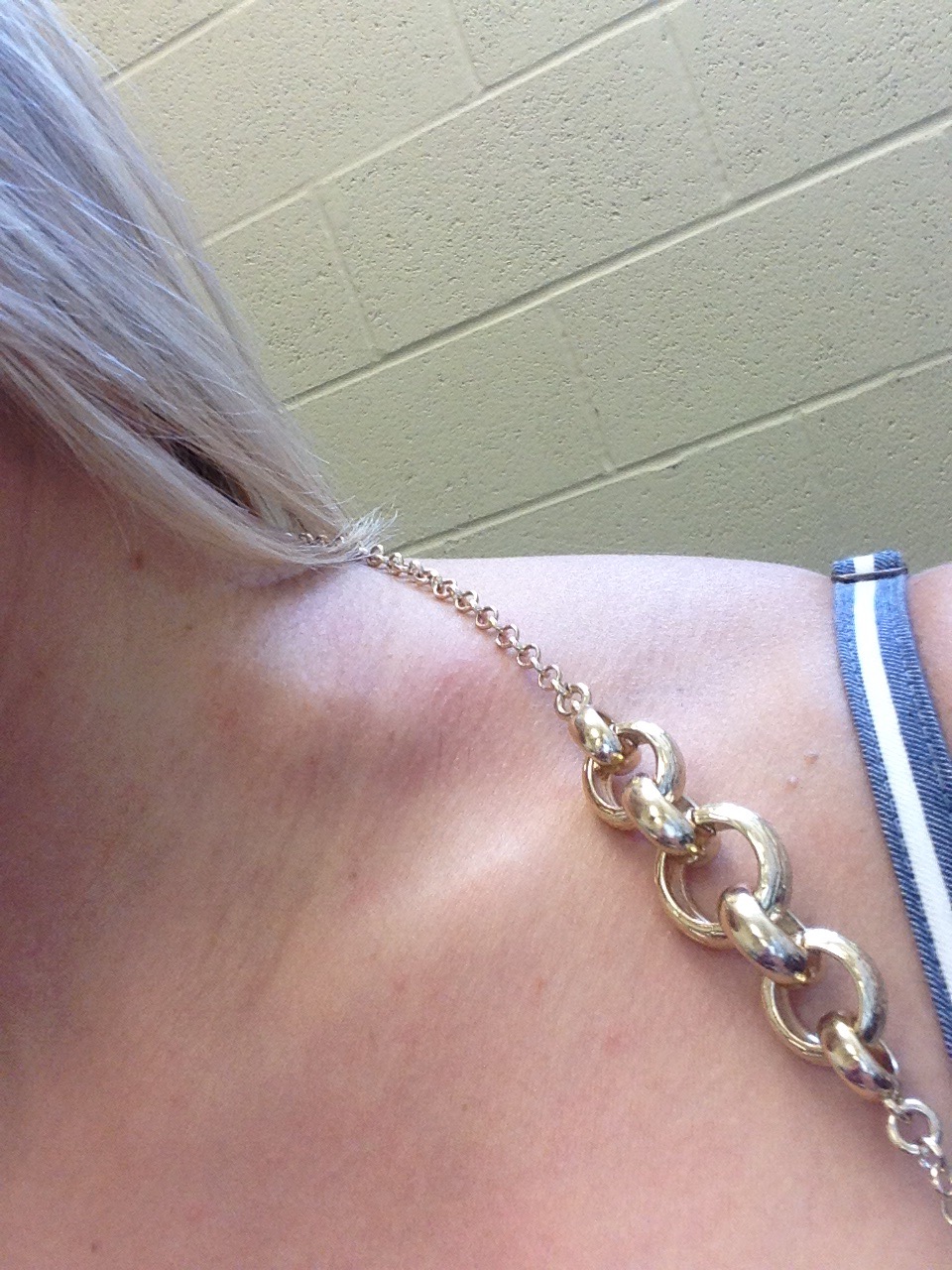 I think this picture is poignant and unique and important. It actually shows a moment when I knew my body was unhealthy, but I ignored it. This was taken over six months after I started noticing the growth of my lymph nodes, but over five months before I was diagnosed with cancer. I am surpised that I have this picture. I am similarly surprised I did nothing for so long despite obvious issues, especially when I consider my otherwise aware and analytical nature. Instead, my response was neglectful and joking.

Since taking this picture and going through treatment and now healing, I have become more in tune with myself and learned to trust my body and instinct. In my past several of months of healing and restoring, I have discovered that my instincts and “gut decisions” are often correct. I also have come to appreciate on a new level that my mom and dad instilled a strong sense of self and taught me to be rational and make decisions based on facts and always think of my best intersts and my future.

I think one of my challenges now is to not hyper-focus. My current decision is over when I want my next PET/CT scans. In July, I decided on Dr. Park’s and other prudent advice, that I would push out my next set of scans to January (six months from my last scans), based on avoiding unnecessary exposure to radiation due to my positive prognosis. This week, the new nurse in charge m of my clinical trial at UNC Lineberger contacted me regarding my next scans (yes, this means no more adored Elizabeth, and this news was saddening. Elizabeth was an integral part of my treatment. She was positive, caring, and made me feel confident at each step, to say the least). The new advisor/nurse Barbara advised pushing my scans out to April 2016, which would be 9 months since my last scans. On a side note, Barabara worked closely with Elizabeth throughout my diagnosis and treatment, and I met her during the weeks when I was neutropenic and making significant decisions. From a patient’s perspective, I appreciate her diligence in remembering the first time we met and contacting me via this issue after talking to Dr. Park and Elizabeth (and in my preferred method ie: email). However, her presentation of the option is different than what I had previously decided with my team. Her option of pushing my scans out three months has been a very heavy decision this week in a number of ways.

First, I was taken aback that she claimed that Dr. Park had a new recommencation from what we decided in July. Second, I had to weigh the change in plan and the prudence of avoiding raditation versus not knowing information for nine months. Third, I had to weigh the mental, emotional and maybe physical toll that delaying a scan would put on me. I researched. I consulted with the people I can actually trust to know the pertinent information and care to see me live. Our decision at this point is to procede with the blood work and appointment and check-up with Dr. Park on October 6, 2015, and scans in January 2016. I am fortunate to have significant people in my life with on point training and experience to help me in this decision.

I think many people claim that experiencing cancer, whether personally or secondarily, changes their perspective and makes them more aware or appreciative of life. I am not sure that cancer had that effect on me. I always appreciated the life, experiences and people in my life. I think I am able to let go of minutiae more quickly and somehow my heart feels bigger and more. I think I focus more on those meaningful and fulfilling moments more. In the same instance, I have learned to feel the sad, negative feelings more, and be okay in feeling those and not suppress them. I think more than anything my awareness has increased. I know when my levels are low or when my body tells me I cannot do something, and I don’t dismiss those signs. I know the days when I am worried about my health, my future, or the numerous things outside of my control, and recognize that my mind is running rampant. I know in these instances, I have to be confident in my abilities and trust in the rest of life and approach it with an optimistic mind. I think most importantly, I have to hold on to the fact that I am a good person, and that I believe that good will come in the world because of what I will add to it.

1 in 50 people will develop NHL during their lifetime. Frequently in interactions with others, often spurred because of my short hair or changes in appearance over the past 8 months, I take the opportunity to inform them of lymphoma, answering as many questions as they ask and giving as much detail as they will hear. September is lymphoma awareness month.  All of my days feel like lymphoma awareness because so many of my decisions, thoughts, and actions are impacted or altered by the fact that I had lymphoma. Lymphoma gave me awareness of the incredible number of people who care for me and who I am. Lymphoma made me focus on the important people in my life and that we will change the world. We will bring happiness to each other. We will be a part of making the world a better place and continually inspiring each other. This is what cancer gave me: a better, more loving, and positive future than I could have imagined. Cancer made my heart bigger.