By last Saturday, my energy levels had returned to almost normal and have been great ever since, so I feel like I have a good week to recover before going in for my third infusion next Tuesday. We also had an awesome time last weekend hosting Alecia and Amit, and Abbey from Sunday through Tuesday. I always love having friends and family visit, but especially more so lately because of the restrictions on my ability to travel and be in public. Another part of having people visit now that I really value is being able to talk in person about my cancer and explain it and answer questions and show the changes to our lives because of it. The conversations and shared experience is very special to me and adds a new depth to our friendships.

Monday night at dinner as Abbey, Jason, and I were talking about it, it occurred to me that despite the vast amount of research many of my friends have done about DLBCL, understanding lymphoma generally is difficult, because it is a rarer cancer (a blood cancer) and has dozens of subtypes, and therefore, it is not easily understood. Before all of this, I’m not sure if I could accurately describe what the lymphatic system was or what having a blood cancer meant. To share a bit of the knowledge I’ve gained from this: the lymphatic system is part of the immune system and consists of the lymph nodes located throughout the body, spleen, tonsils, thymus, and bone marrow. Lymph (fluid) contains white blood cells called lymphocytes which are circulated throughout your lymphatic system to help fight off bacteria, viruses, and other microbes. There are three types of lymphocytes: T-cells (thymus cells), B-cells (bone marrow cells), and NK-cells (natural killer cells). At most basic level: B-cells make antibodies; T-cells kill pathogens directly and help other immune cells; and NK cells kill off tumors and virally infected cells. Lymphomas occur when these cells start dividing, multiplying, and behaving abnormally, but the causes are unknown. Apparent from the name of my subtype of Non-Hodgkins Lymphoma, DLBCL is a blood cancer of the B-cells. The “diffuse” in DLBCL means that cancer cells do not clump together well. DLBCL is an aggressive form of lymphoma and can arise in the lymph nodes (where mine did), gastrointestinal tract, testes, thyroid, skin, breast, bone, or brain.

So although, Abbey was able to discuss all of these things with us and completely understand in the abstract, I realized showing her the scar on my neck, the scans that show my affected lymph nodes, and the lump and scar on my chest from my port that makes the knowledge more concrete and understandable. I pulled up pictures on my phone from the first CT scan I had on December 4, 2014, and saw the same response and look of understanding on her face that I had when I first sat at my computer at work scrolling through the scans. As I told Abbey, when I went in for the x-ray and CT-scan on December 4, the technician was nice enough to explain the scans to me, and describe what she was seeing, so although she couldn’t provide any diagnosis, I was alerted to the fact that something was different (wrong) with the left side of my neck.

This first scan here is a view coming down from the top of my head down through my neck and chest, so imagine looking down through my neck and across my shoulders from the top of my head. The image is reversed, but the neck is supposed to be symmetrical, so you can see the great difference here. On the right side of the picture (the left side of my neck), you can see just to the right and slightly up from the arrow that there are more circles there than there are on the other side, and those turned out to be my affected lymph nodes.

Here is another picture scanned across the top of my body, and again the picture is reversed. On the right side of the picture below, you can see all of the little “balls” directly up from the arrow. The three largest ones you can see were all over 2 centimeters in diameter each at the point I was scanned, and when I had the excisional biopsy on December 19, 2014. Lymph nodes above 2 centimeters in size, as I’ve mentioned previously, are one of the red flags to doctors that there is something wrong. 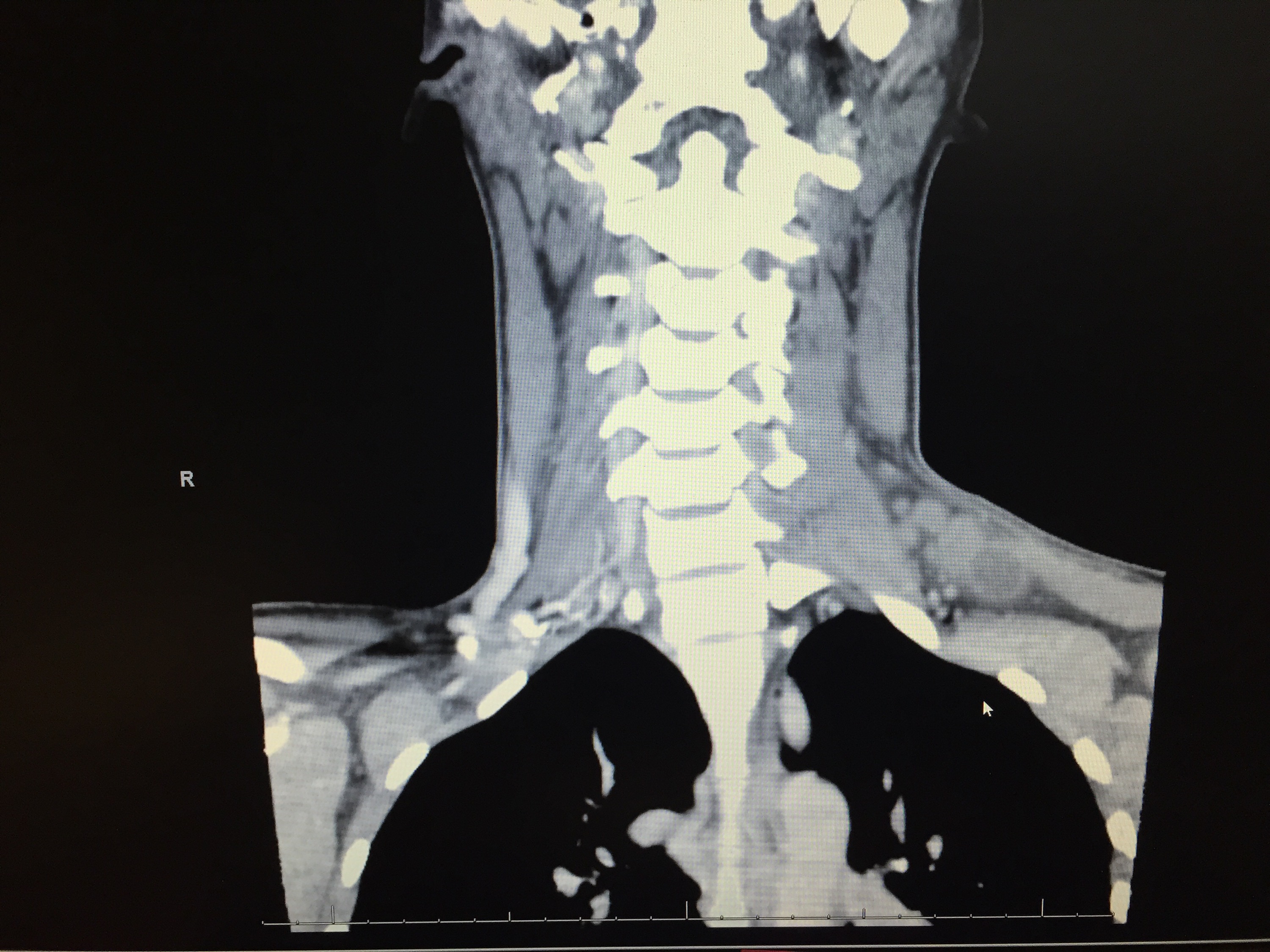 The afternoon I got this disc of my scans and in the weeks following, I spent a significant amount of looking at them, absolutely fascinated. I’ve found everyone’s reactions to seeing the scans or the pictures of them to be very similar. Although the pictures here reveal that my body wasn’t working properly, the human body is amazing. It is incredible to know that in the three weeks from my first infusion to my second one, the affected nodes shrank in half. There is a noticeable evening of the supraclavicular region of my neck from the left to right over the past six weeks now. I can feel a difference when I touch each side, and that necklaces don’t sit as lopsided on the left side of my neck now as they did just a few weeks and months ago. I am excited to see Dr. Park again on Tuesday and see if he is able to detect continuing shrinkage. I am also growing increasingly anxious to see the results of my follow up CT and PET scans on April 2nd, obviously to find out how many more rounds of chemotherapy I will endure, but also to see the changes over the course of 9 weeks of chemotherapy and in the 17 weeks since I had the scans above. As much as I’ve spent every minute since being diagnosed (and maybe even before the official diagnosis) hoping and waiting for the moment I would be declared in remission and ultimately cancer free, I realized this morning that I am not sure that I can comprehend the fact that I may be only several weeks away from that moment and from finishing chemotherapy, if my scans are clear, and I only have two more rounds of chemotherapy left. I am thankful that there is the great likelihood that this whole journey from diagnosis through treatment and to remission may only be a matter of months, but it is something that has consumed my and Jason’s lives and the lives of everyone who has loved me and supported us through this. I’m not sure how to go from being told that I have cancer that had to be treated essentially immediately otherwise it would kill me, back to “normal” again. I’m sure I will come to understand and adjust to that idea and to living normally and cancer free, but for now that idea is just as boggling as it was being told I had cancer in the first place and maybe just a little too distant and uncertain to grasp now. Having cancer has changed me and become a part of who I am and who I will become, and I can only hope that it is for the better.