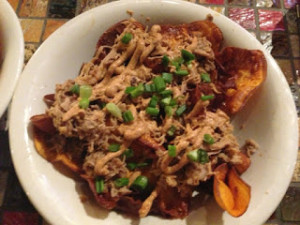 There are a lot of adjustments that come with a big move. For me, it has been not only adjusting to a new city, but also adjusting to being “retired”, as I’m calling it.  The changes and things that one must adjust to exceed anything I had imagined. The small things like the time restaurants close during the week, which is often earlier than my normal dinner time and inevitably caused me to freak upon finding this out initially, are some of the most unexpected and difficult to adjust to, but I am starting to realize all of the pleasant surprises and fun of a new city.
Last Friday, I tried a new salon and stylist (who is the artistic director). It was a nerve-racking process after using the same wonderful man in New York for four years to change to someone new, not only because of the fear of ending up with terrible hair, but also because it means I am officially establishing myself here. However, Jay had a great rapport with me, took the time to find out the history of my hair and my preferences, and was very knowledgeable.  And most importantly, I walked out feeling more beautiful leaving than entering the salon.
Also on Friday, Greensboro was having its Festival of Lights, which included all of the normal holiday festivities including a tree lighting, Santa Clause, tents of music acts, goods and food, and a bit of snow (from a machine or “soap” as Jason called it. It was enough to excite me anyway about it). It certainly wasn’t the scale of tree lighting and holiday festivities I’m used to atRock Center, but nice to see people enjoying the season nonetheless. 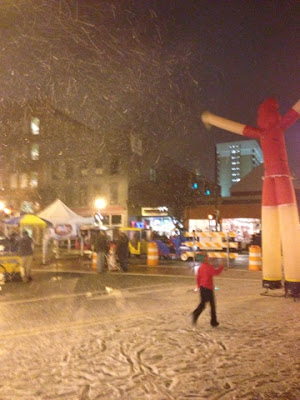 Due to the lovely southern “winter” weather (rain and 40-something degrees), we decided to forgo partaking in extensive festivities including watching the tree lighting, ice skating and marshmallow roasting, and do a quick walk through it all on our way to a new taco place called Crafted, The Art of the Taco. This was actually our second time frequenting this restaurant. We went the previous Saturday night, which was the first week it was open for dinner, and thoroughly enjoyed it. Because of my obsession with any restaurant or truck that has tacos on the menu, this was the obvious choice for the night.

We started the feast with nachos and queso, because I can’t eat at a restaurant that has queso and not order it. The nachos have a base of thin sweet potato chips cooked on premise and topped with pulled pork and a spicy aioli. The chips were a nice surprise and helped keep the nachos on the lighter side. We also added a house hot sauce to them (as I do to most dishes), which has a good bite and a smoky flavor. The queso is not your typical white queso that most Mexican restaurants will serve; it is a blend of three cheeses, pimento, white cheddar and a third cheese I cannot remember, and was quite mild and nice. 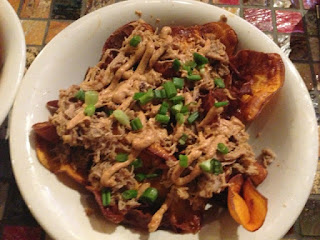 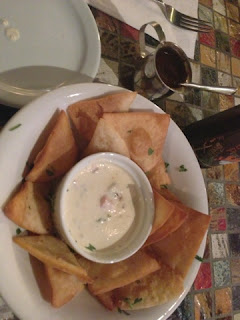 Next, I had to try the tuna tacos called the “Fedora”. They were two tacos with seared tuna and pineapple. It was an excellent combination; the only thing I would have changed was the end pieces of the tuna were a little well done for my liking, but the middle pieces were a seared to a good pink rare. I ordered a side of black beans, which is a food I often think I don’t like; however, I enjoyed them so much the first time I ate there, so I they were my first choice for a side again.  They had a smoky and lime flavor. 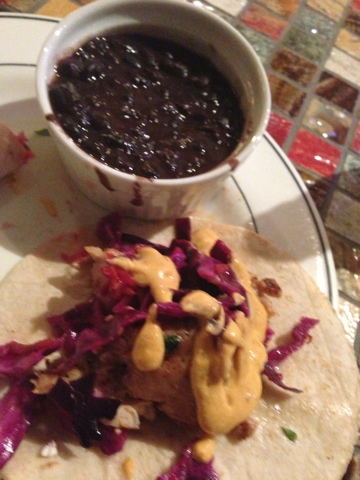 The food and service were great; we sat at the bar per our usual custom, and they have an awesome beer selection. I had an excellent toasted coconut porter among a few other good local beers. It was a great dining experience and addition to the downtown Greensboro restaurants, and will almost certainly be a regular on my list. 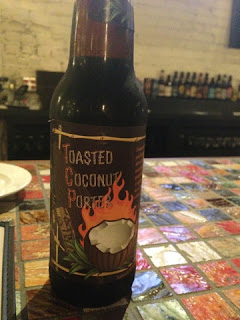 all photos by yours truly