Last year for my birthday, Jason gave me the Modernist Cuisine: The Art and Science of Cooking after we saw it on The Colbert Report. It is a six volume set of books that starts with the history of food and moves through techniques and skills that have landed us in the current era where food, science and art combine, which is something I find absolutely fascinating. I love all of the restaurants and chefs that are embracing this idea in their food and drinks and creating things that are incredibly flavorful and beautiful and visually interesting. One such molecular gastronomy restaurant I have yet to make it to, but am dying to try on my next trip home is wd-50. 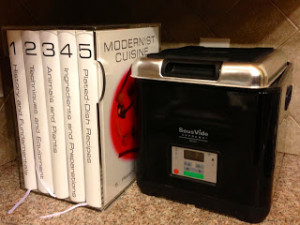 Since the move, I have been reading Modernist Cuisine and experimenting with some of the new techniques including sous vide, which is a method of cooking food in a sealed airtight bag for a longer period of time at the temperature at which the food should be served. The first time that I had something cooked sous vide was at Aguaviva in Old San Juan. While at dinner, the chef came by our table and offered recommendations including the sous vide salmon, which was a special for the night, and he only had two left, so I of course immediately ordered it. It was so moist and flavorful, which prompted Jason and me to buy asous vide, so we could start experimenting.

I am now taking the time to read the Modernist Cuisine books, which are each the size of a casebook, but are a lot more fun and interesting. I am trying to go through each of them in order, but because of my impatience and their length, I have started the first “History and Fundamentals”, and then have jumped forward to using some of the recipes. The first recipe I tried was lamb chop sous vide with a side of garlic rosemary potato puree and arugula salad (recipe below). It only took me cooking sous vide once to determine it is the easiest way to cook, because for meats it only requires seasoning the meat, vacuum sealing, and setting it to cook at the appropriate temperature; then the sous vide does all the work. Here is a summary and recipe of my first sous vide experiment. 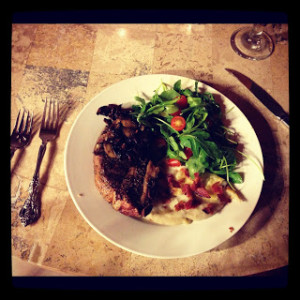 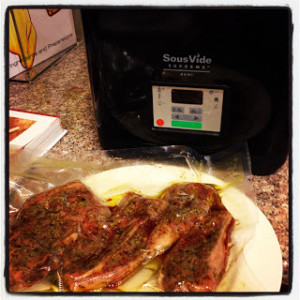 Step 3: Once all side items are complete and the mushroom broth (below) is done, sear the lamb chops on the grill for 1-2 minutes on each side. They can also be seared in a skillet if you do not have a grill.

While the lamb is cooking in the sous vide, I peeled, diced, and boiled about 7 Yukon Gold potatoes. After boiling them until they’re soft enough to cut with a fork, drain the water out of them and add in a small can of fat free evaporated milk, a teaspoon of minced garlic, a teaspoon of dried rosemary, salt and pepper to taste, and blend with an immersion hand blender until completely smooth. (Side Note: The handheld blender is an extremely useful kitchen instrument. It allows for more control and comes with many nifty attachments and is easy to use and clean up-dishwasher safe!) 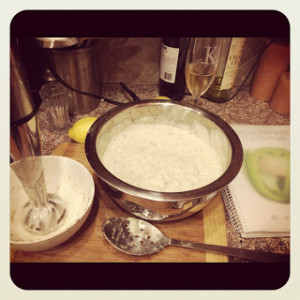 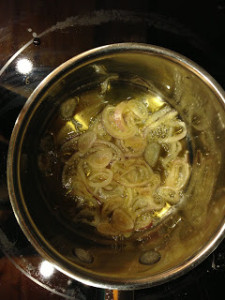 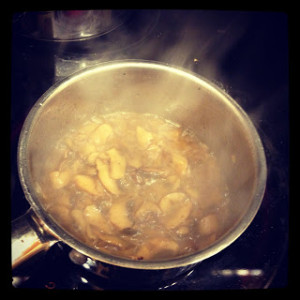 Final Touches and Presentation: I served the lamb chops topped with the mushroom broth; the potato puree topped with bacon crumbles; and finally made a very simple arugula salad with halved cherry tomatoes and topped with an Italian Vinaigrette. (I used Walden Farms Zesty Italian-it is delicious and calorie-free = mind blown!) And voila! Add iced tea, prosecco and candles, and this is a dinner that is sure to please! 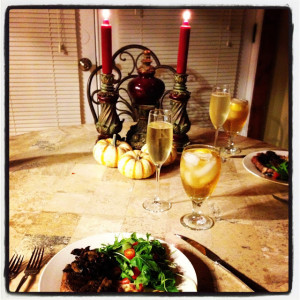