Skip to content
Home » Travel » Island Life and My Best Friend’s Wedding in Paradise: USVI and BVI
I spent five days last week pretending that I gave up my career and fulfilled my long time fantasy of moving to the islands while celebrating my best friend’s marriage to the man of her dreams. Sadly, I did only have five days to pretend I didn’t have to come back to life on the mainland with all that that entails (work, ew), but I maximized my time in St. John and BVI. And today, as I sit back at my desk, daydreaming of all the places I’d rather be, I thought I would share a few notable restaurants, travel tips, and adventures, and add better views to your day through pictures.

The Journey to St. John:

Jason and I took separate flights to St. Thomas (booking with travel reward points), but landing at St. Thomas within a few minutes of each other. Upon arrival to STT, we were greeted with complimentary Cruzan rum shots, and Jason had a beer from the bar located at the baggage claim. I don’t know why more airports don’t have bars at baggage claim! It would certainly help cut the tension for people who have bags that are lost.Another tip about STT: the flight attendant announced that we must arrive 3 hours prior to departure on the trip out. I’m terrible about underestimating the length of time it will take me to get through security and/or customs, and always cut it very close when traveling. On the return trip, I had a 1:50pm flight out of STT. I took the 11:00am Westin ferry on the Westin concierge’s recommendation, which had me to the airport by 11:45am. I had plenty of time to get through customs and security and still had about an hour to sit before boarding, so I think you can probably take the the “three hour” as a suggestion and not a hard cut “MUST” rule, but do keep in mind you have two steps to get to your gate: customs and security. Arrival an hour and fifty minutes prior to flight time was plenty for me, but I didn’t check bags and the lines were reasonable. I did hear one man say it took him several hours to get through customs and security on another trip out of there… 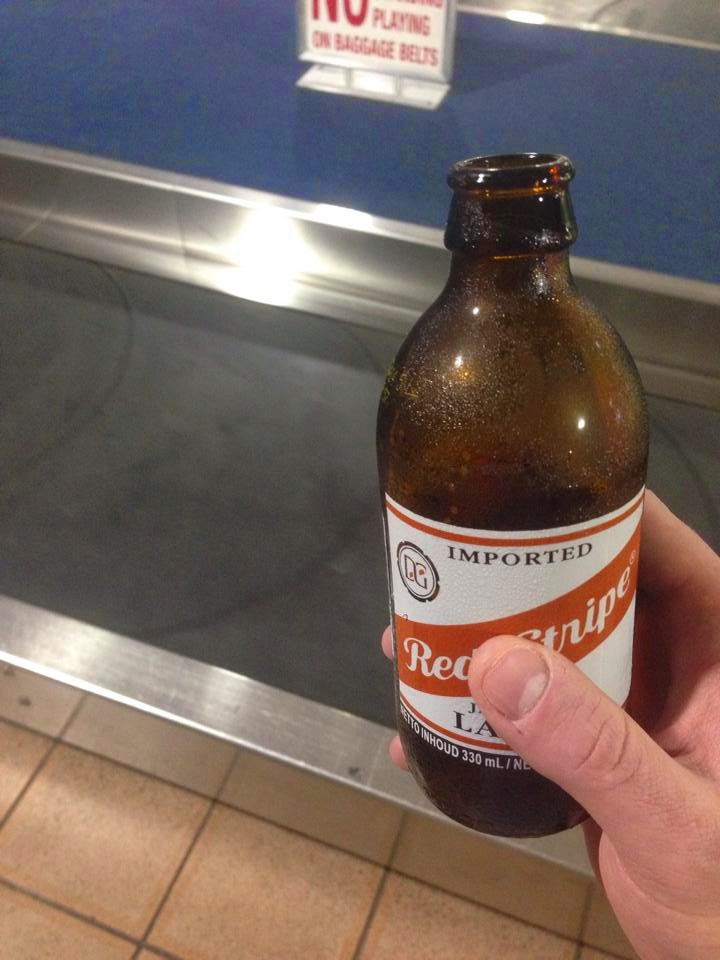 From there we started our journey to The Westin St. John Resort and Villas. The Westin as its own ferry service that goes from the airport directly to the hotel, but it is $120/person (round trip), so Jason and I decided to be adventurous and take the public ferry ($6/person for ferry, plus $20/person for taxis), which required a 45 minute taxi ride to Red Hook, and then a 10-15 minute public ferry ride to Cruz Bay, and another 8-10 minute taxi ride to The Westin. I think it would actually be worth it next time to do the Westin ferry, because you can ride it as many times as you want during your stay, and it saves a significant amount of time (2.5 hours via the public transportation vs. 45 minutes door to airport via the Westin ferry). Despite our somewhat lengthy journey over, it was enjoyable because we completely embraced it, enjoyed the open air taxis and ferry, and a few drinks along the way. We were greeted by Mallory (best friend), Blythe (college friend), and Ellie (Mal’s mom), and an iguana upon our arrival to The Westin.

Where We Stayed: The Westin St. John Resort and Villas

The resort is undergoing construction, but it was fortunately all contained to back areas, and the restaurants were open. There is a nicer restaurant on premise open for all three meals. Snorkel’s is the outdoor restaurant which is pictured below and backs up to the pool on one side and the beach on the other and is great for those light lunches or afternoon snacks. They also have a bar that serves a variety of drinks including the island signature cocktail the Painkiller, and rum drinks out of children’s sand buckets called voodoo juice. The voodoo juice does work out to be a great choice because it doesn’t taste like alcohol, but is $15 for the initial drink, and $12 refills, and each bucket is the equivalent of four drinks, so it’s perfect for sharing.
The Restaurants, Food, and Drinks:

Bad Kitty: I’d highly suggest taking this tour or another one of this company’s day tours. Nine of us from the wedding party took a catamaran tour of the BVI on the Bad Kitty. It was an awesome way to see five different notable spots in the BVI. We started the day out bright and early (7:30am!) and took a peaceful ride with breakfast over to Virgin Gorda to get through customs and do a quick bit of shopping. 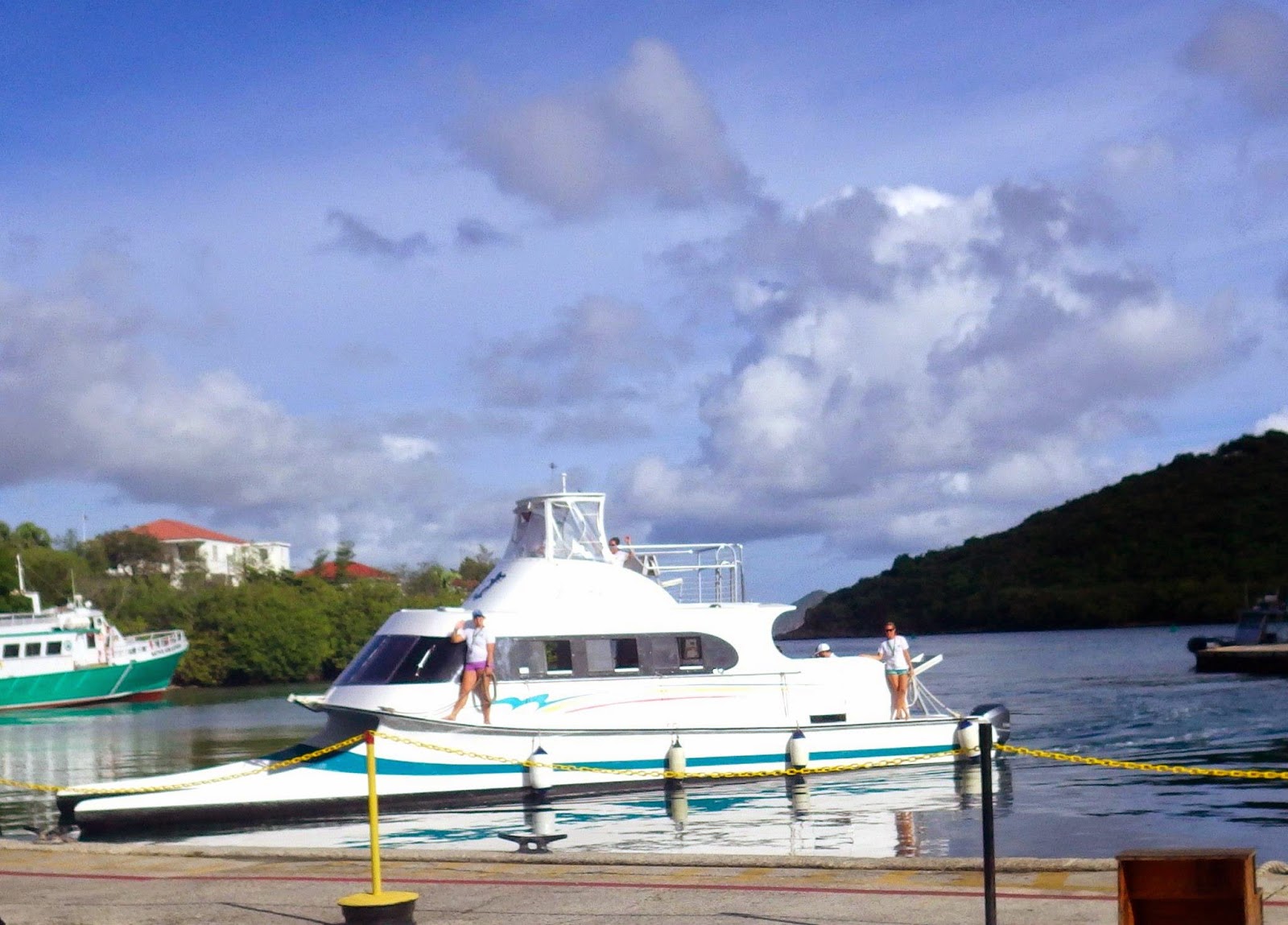 Stop two of the day was to The Baths, which an area where huge granite boulders were formed on the beach by volcanic activity. The only other similar location in the world is in the Seychelles Islands. We swam seventy yards from the boat to The Baths where we walked through, between, on top, and under these huge boulders learning cool facts about their formation and events that have taken place there. The Baths were so so cool and should definitely be added to your “must see before you die” places! (I’ve definitely added the Seychelles Islands to see the baths there to my list.)
Next stop was to Cooper Island for lunch (see above), and then to Norman Island for some snorkeling. There were three caves in the side of the cliffs at Norman Island, and the snorkeling was better than that at Trunk Bay. The sea life was not afraid of people and came within inches, and the coral was incredible. We also saw two eels while snorkeling!
Final stop of the day was to Jost Van Dyke to see the beautiful beaches of White Bay and to finally taste the original Painkiller, which is a coconut rum cocktail with fresh shaved nutmeg, at the Soggy Dollar Bar (they also have now created the Nilla Killer–a vanilla rum based version of the Painkiller). This place is definitely one that every tourist goes to, but is so much fun, and one where you totally need to embrace your inner tourist. The bartenders are hilarious, the drinks are delicious, and the beach and water is gorgeous. Can’t go wrong with that combination!
I would classify the Virgin Islands as a very beautiful, relaxing vacation spot, where you know you’ll get a comfortable and more customary standard of accommodations/food/drinks, English is universal, the U.S. Dollar is the standard (duh), and the craziest things you’ll face are the ocean life and open air taxis. We saw many people visiting with their families, and see how it would make a great vacation spot for an easy long weekend getaway. I hope you enjoyed a little escape to the Virgin Islands with me! Our trip certainly revitalized me and has me dreaming of my next vacation!
xoxo
*K
(all pictures by me)