Skip to content
Home » Recipes » This may be the best thing ever: virtually fat-free truffle lobster mac and cheese!
Mac and cheese is one of my favorite foods ever; one I think I probably could eat daily, and probably have for more days in a row than I should admit. The only way to make the creamy and cheesy deliciousness better is to add some truffle flavor and lobster. Unfortunately, it is normally a high calorie, high fat dish. I was recently found this recipe that makes virtually fat free mac and cheese, and was immediately intrigued and had to try it. (Brandon behind Kitchen Konfidence has a lot of cool recipes and ways to do some of the modern techniques without all of the expensive equipment.)
I’ve re-posted the recipe below with my adaptations. I was extremely pleased with the outcome despite my initial fear that it would not live up to my ideal of mac and cheese.
Virtually Fat-Free Truffle Lobster Mac and Cheese: 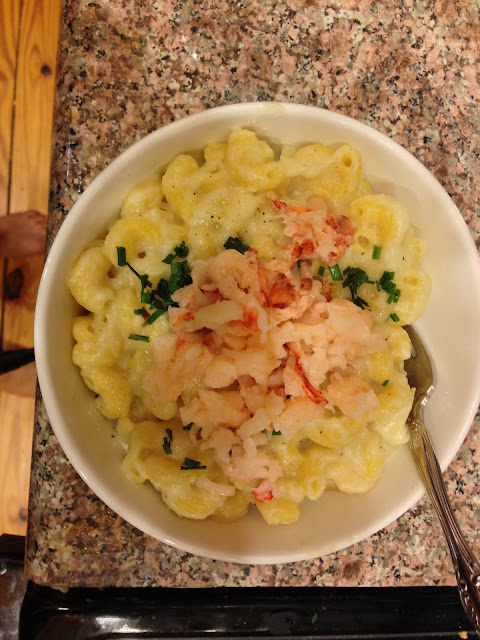 Ingredients
1. Thinly slice full head of cauliflower and set aside. 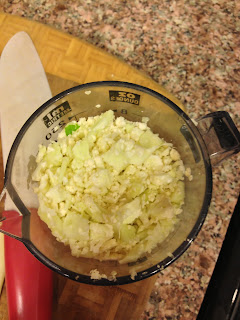 2. Place lobster tail in bag with 1/2 tablespoon of butter and salt and pepper. Cook sous vide in a 60°C bath for 45 minutes, then set aside in microwave to keep warm.
3.  Put all of the grated cheese in bag with 3 1/2 cups of water.  Vacuum seal the bag to best of your ability. (It’s a bit difficult to vacuum seal the bag fully because of the water; as you can see below, there was a little bit of air left in mine, which is okay.) Cook sous vide in a 176°F bath for 30 minutes. 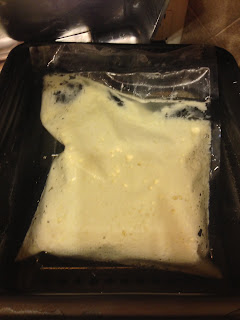 4. While the cheese is cooking, boil the cauliflower, then drain and puree using a hand emulsion blender. Set aside. 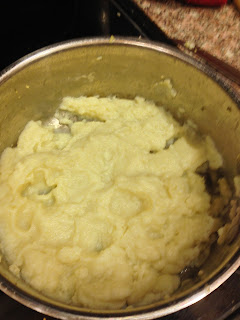 5. Once cheese has finished cooking, strain the cheese and cheese water into a bowl, through a strainer using a cheese cloth (or paper towel as I did if you don’t have a cheese cloth on hand-see below). 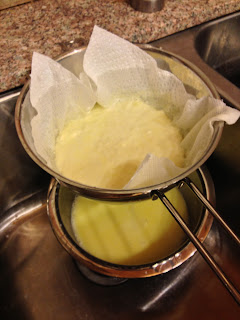 6. Cool the sous vide bath temperature back down to 60°F, and put lobster back into it to warm until the rest of the steps are done.
7. Boil the macaroni noodles in the cheese water until they are al dente and have absorbed the cheese water. 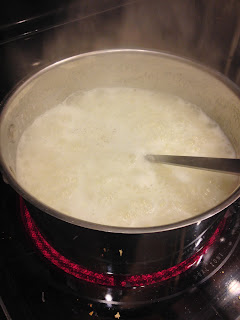 8. Mix in the cauliflower puree, and season with truffle salt and pepper.

9. Serve mac and cheese in a bowl and top with lobster tail and chives.
Note and Thoughts on the Recipe:
This was an excellent choice to make on a rainy Friday night and enjoy with a buttery chardonnay, and be able to enjoy knowing you have cut out extra calories and fat!